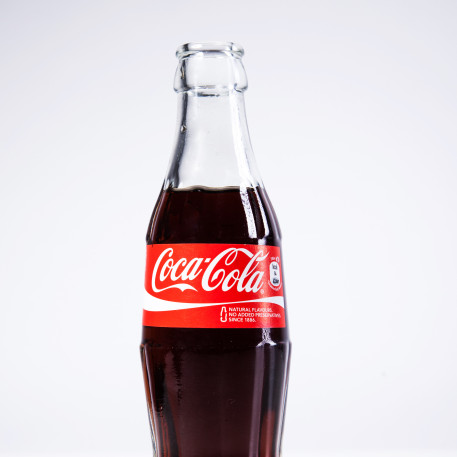 As every Coca-Cola fan knows, it just tastes best in glass. This is why, at Friends of Glass, we’re delighted to see Coca-Cola celebrating 100 years of its iconic Contour Bottle with an eye-catching campaign.

The “I’ve Kissed…”, global campaign features icons including Elvis Presley, Marilyn Monroe and Ray Charles being ‘kissed by’ the Coca-Cola bottle. The idea is that anyone can ‘Kiss Happiness’ by simply drinking from the iconic glass bottle.

With its unmistakable silhouette, the Coca-Cola Contour Bottle is one of the most famous designs of all time. Created in 1915 by The Root Glass Company of Terre Haute Indiana to stop the efforts of copycat cola brands, the bottle answered a brief that called for “the packaging to be highly distinctive, recognised by touch alone and identifiable even when in the dark”.

The design stood the test of time and is now manufactured across the globe. In the UK, the bottles are made exclusively by Yorkshire-based glass manufacturer and Friends of Glass member, Ardagh Group.

Over the past century, the Contour Bottle has cemented its place not only in hearts of Coca-Cola lovers across the globe, but also as a true icon of popular culture and a favourite of glass fans everywhere.